Well, where do I begin with what went wrong today? It all started when I got the our site and went to unload the generator. Having loaded it into the truck last night, I’d used my security cable to lock it to the bed. Apparently I left the key sitting on the aquarium by the door when I left this morning. I had to move the truck and ran the genny from the bed the whole day. At lease she cranked up easy and ran like a dream.

I won’t even get into all of the various issues I had today swapping between different coax and antennas. I made a whopping one contact with my friend’s Buddistick. Didn’t make a single one on the P1. The rig was also seriously wigging out. My Z11 tuner would get a mind of its own every once in a while. The thing would tune, all the LEDs would light. It was insane. I damn near went crazy trying to get PSK31 working. Never did. It was the damndest thing. I connected the RIGBlaster PnP like I always do but I couldn’t get a waterfall. Disconnect the input and there’s the waterfall. I finally got it receiving (no idea what I did at that point) but while the PTT LED would light the rig never keyed. I gave up on digital after about an hour and decided to make it a voice station.

Ok, it’s about time for some good news. We didn’t have many kids show up. Regardless, the three that were there had a good time with our mini foxhunt. Unfortunately I didn’t get to spend much time with them doing instruction since I was so focused on all of my own problems. I think it went off well enough that I’ll try to have it again next year.

Back to the misery. Through all the mishaps I swear I had to look like a Keystone cop. I guess I just kept getting flustered and was making dumb mistake after dumb mistake. I swear that before Field Day even officially kicked off I was more than ready to throw in the towel and say “Screw it, I’m outa here.” There was only one flaw with that logic. Go back to the first thing I mentioned. I had the generator and couldn’t very well leave it and pick it up later. So I stayed.

At least we had a good time. The burgers and dogs were good. We even met a new friend from SC who was down visiting family and looked us up since he was missing his home club’s event. Bob stayed with us all day and it was a pleasure to meet and get to know him … even if he did give me a hard time like the rest of the gang. I won’t hold it against him for long. 🙂

I discovered one problem with my Z11. I believe I read where this is actually a common problem. The ground nut was very loose so I had to open it up and tighten it down from the inside. I also noticed my audio would go away at times. Turns out I might have a bad phone jack. Plugging phones into the 718 and removing it would whack it out. Tap the jack or insert/remove the phone jack again and the audio would return. Figures.

Summers in Florida usually have one thing in common year after year: thunderstorms. Today was no exception. About 3:30 or so the rumbles started and we decided to break down. We had the monster V to drop, the 20M rotating dipole, G5RV, Buddipole, and Buddistick along with 5 radios and all the paraphernalia that goes with Field Day. We hadn’t quite finished wrapping everything up when the rain hit. As we huddled under the pavilion it hit hard. Then it got harder. The loudest, closet bolt of lightning I’ve ever experienced seemed to have hit right over our heads. It’s not something I’d say I’d like to be in again. I wish I could’ve gotten a shot of the radar while this was going on but this after-shot will have to suffice. You can see it was still looking pretty nasty after I got home. We were stuck under the pavilion for at least an hour. 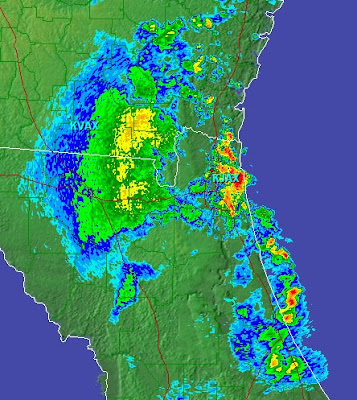 Alright, so maybe I’m a glutton for punishment, but I really wanted to figure out why I’d had so many problems with a configuration I’ve used before. I pulled everything out of the boxes and mounted things back in the shack. That’s when I discovered what I believe is the source of all my woes today … the data cable.

It would appear upon close examination that the data jack from the RIGBlaster to the 718 will fit both ways. There’s an arrow on the jack which I put in the top position so I could see it. The jack fit fine. However, this would appear to be wrong. Comparing the pin layout with the rig jack, I had it upside down the whole time. I don’t think I caused any problems or damaged the rig, but it sure as hell screwed me up. Tonight I’ve heard all the traffic I should’ve heard earlier. The rig is keying up with PSK31 as expected as well. The world seems to be right again.

I’ll have to put the P1 and Buddistick back into service tomorrow to confirm my suspicions but for the moment I’m thinking that was it. I’m sick that I blew the entire day for such a simple, stupid problem. I guess that’s what Field Day is for, though, right? I learned a valuable lesson if that has, indeed, fixed the issue.

And that’s my Field Day ’08. I was up late getting ready for the fiasco and I’m up later than I’d planned tonight. I’m going to bed.